Smiley Antenna TA Base Connectors allow you to swap the connector type and gender on any Smiley Mini Rubber Duck, Slim Line Whip, Slim Duck or SuperStick antenna, as part of their System One, Tuned Duck Antenna System!

Available as SMA Male, SMA Female, or BNC connectors with solid machined brass pins for extra strength and solid connections, a Black Delron insulator to the base of the antenna, and a nickel-plated body for corrosion resistance & durability. Easily screws on and off of any Smiley Duck, Whip or SuperStick antenna. Keep one of each handy and operate on any radio available!

Works with Wouxun, AnyTone, TYT, Retevis, TERA & most other radios with an SMA-Male, SMA-Female or BNC antenna connector. A rubber washer is included with the SMA-F connector for added waterproofing and stability.

Includes a 1-year manufacturer’s warranty, but these solid connectors will last many years under relatively extreme conditions.

There are no reviews yet. 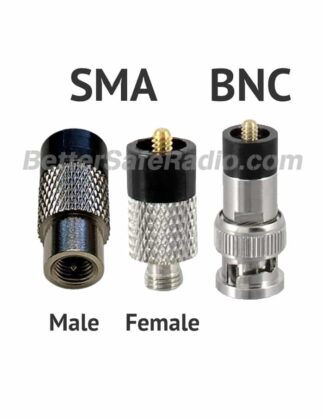