GMRS, or the General Mobile Radio Service band is part of the PRS, or Personal Radio Service bands, as outlined by 47 CFR Part 95E (formerly Part 95A) of the FCC (Federal Communications Commission), which regulates and makes rules for the use of all RF (Radio Frequency) radio spectrum in the United States. The band is usable for personal or business two-way radio communications with up to 50 Watts of power (5 Watts on some channels and 0.5 Watts on some other channels shared with the FRS channels – see chart below), and GMRS radios like the new exclusive BetterSafeRadio co-designed Wouxun KG-UV9G PRO GMRS Two-Way Radio & SHTF Scanner are used by individual preppers, families, businesses, Neighborhood Watch groups, CERT, REACT, Guardian Angels, and other organizations, and is often used for recreation, sports and everyday family and business communications. 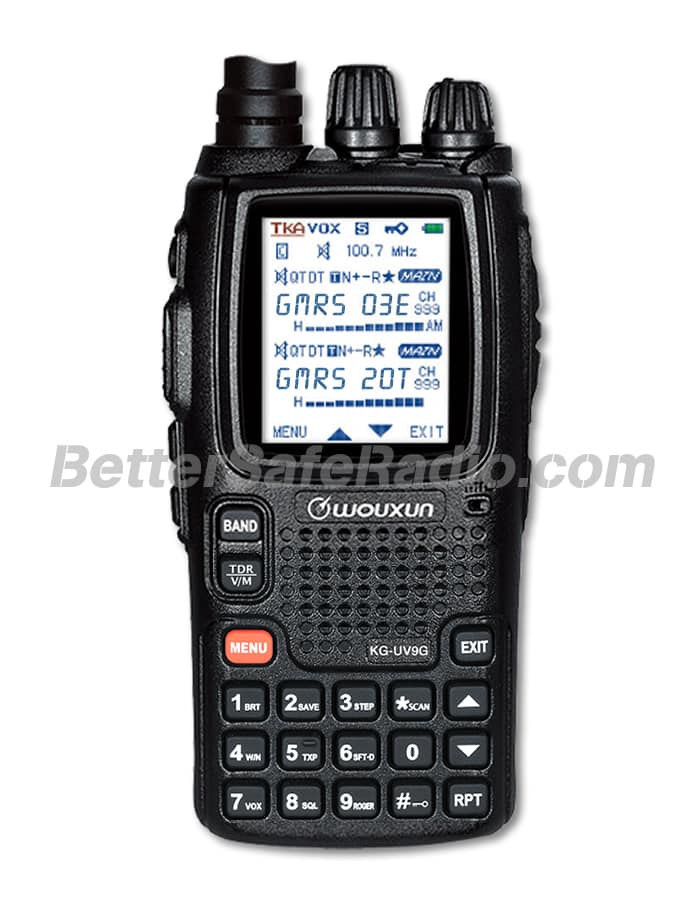 The GMRS band consists of 30 GMRS frequencies, which after recent FCC revisions of the PRS rules, now overlap on 22 channels with the FRS (Family Radio Service) band (with a revised band plan as of September 2017). Transmitting on GMRS channels does require a “no-test” license, which can be easily obtained online by any US citizen 18 years of age or older. Here’s a great tutorial on how to get a GMRS license from the FCC. Although there have been suggestions from some users to remove the licensing requirement from the GMRS band, there was no change when the FCC recently revised the PRS rules.

GMRS allows analog FM voice operation, and digital positional and text messaging with strict limitations. Digital voice modes such as DMR, P25, D-STAR, and System Fusion (C4FM) are not allowed on the GMRS band, including the repeater splits.

A GMRS license is currently $70, lasts for 10 years, is shared by you and your immediate family, and with a simple online user registration (do this first to get an FRN (FCC Registration Number), then log in) and license application, is typically granted within just a few days (or less).

NEWS FLASH: The FCC has agreed to lower the GMRS license fee to $35, expected to be in effect in the FCC ULS sometime in 2022. More details to come.

Being in the UHF band between 462 & 467 MHz (megahertz), GMRS radios are particularly useful for indoor and urban settings, because these higher frequencies have a tendency to reflect and bounce around between obstructions, and thus reach their destination when lower VHF frequencies would otherwise be absorbed and fall off. On the same token, GMRS usually doesn’t do as well in rural, outdoor settings because the UHF waves tend to be absorbed more by trees and foliage, and don’t “bend” over hills as well as lower frequencies. This is why we recommend that your EmComm radio capabilities include both UHF GMRS and VHF MURS (and Ham if you are licensed), keeping you safe and in contact in just about any setting.

Unlike the FRS (Family Radio Service) Band, which most people use with cheap, throw-away blister-pack “walkie-talkie” radios with fixed antennas and very low power limits (formerly 0.5 Watts, but now are allowed up to 2 Watts on channels 1-7 and the GMRS channels 15-22 – repeater outputs/talkaround only), GMRS allows external antennas and up to 5 Watts ERP (Effective Radiated Power) on the simplex channels 1-14, and up to 50 Watts of power output on the repeater channels 15-30, greatly increasing your potential operating range and making a GMRS two-way radio a great choice for serious recreational, prepper or SHTF emergency communications. Note that radios using the new allowed digital positional data transmissions are still limited to having non-removable/fixed antennas,

We’ll be providing much more information about this band soon as it’s one of the most popular services used for EmComms (Emergency Communications) next to Amateur Radio!