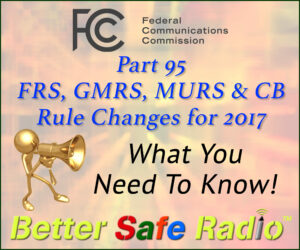 Implementation of the rules took effect 30 days after the new order was published on 08/29/17 (effective on 09/28/17), but some of the equipment changes required by the new rules won’t take place for 90 days to 24 months.

We’ll dive deeper into the changes and also what exciting new gear and programming configurations we’ll be offering to take advantage of the new GMRS capabilities in future posts, but in the meantime, here are some bullet points of the rule changes that might affect BetterSafeRadio customers and FRS/GMRS users in general:

Here’s a handy little chart of the new GMRS/FRS band frequencies, channelized here based on the official FRS channels, and with SHTF Prepper channel use recommendations:

While these changes will simplify the rules and expand shared “interstitial” channels in both the FRS and MURS bands, it may also open up GMRS to more interference from newer, 2W FRS radios. We think this change makes MURS even more attractive for personal, business or emergency/prepper SHTF uses, because it’s VHF and still underutilized as compared to FRS/GMRS. The affordable entry-level Retevis RT27V-MURS and RT27-FRS radios are perfect examples.

Now that GMRS will have 22 channels available, 30 if you consider the repeater configurations, older radios like the TERA TR-505 and other limited 16-channel radio users will need to make some decisions as to which channels they want programmed. Those using larger radios (for emergency use only) such as the Wouxun KG-UV7D or Wouxun KG-UV9P, will be able to program and access all of the FRS, GMRS & MURS frequencies (although Part 90 or 15B/97 radios are not type-accepted for transmitting on the FRS/GMRS/MURS bands). BSR will have new legal GMRS and MURS radios soon that will cover all avail channels under the new PRS rules.

What do you think of these changes and how they might affect the bands? Let us know with a comment below… and Be Safe!

Celebrate American Independence and Save 10% on All Emergency Two-Way Radios!

BSR Black Friday SALE – Save 10% On All Two-Way Radio Gear!